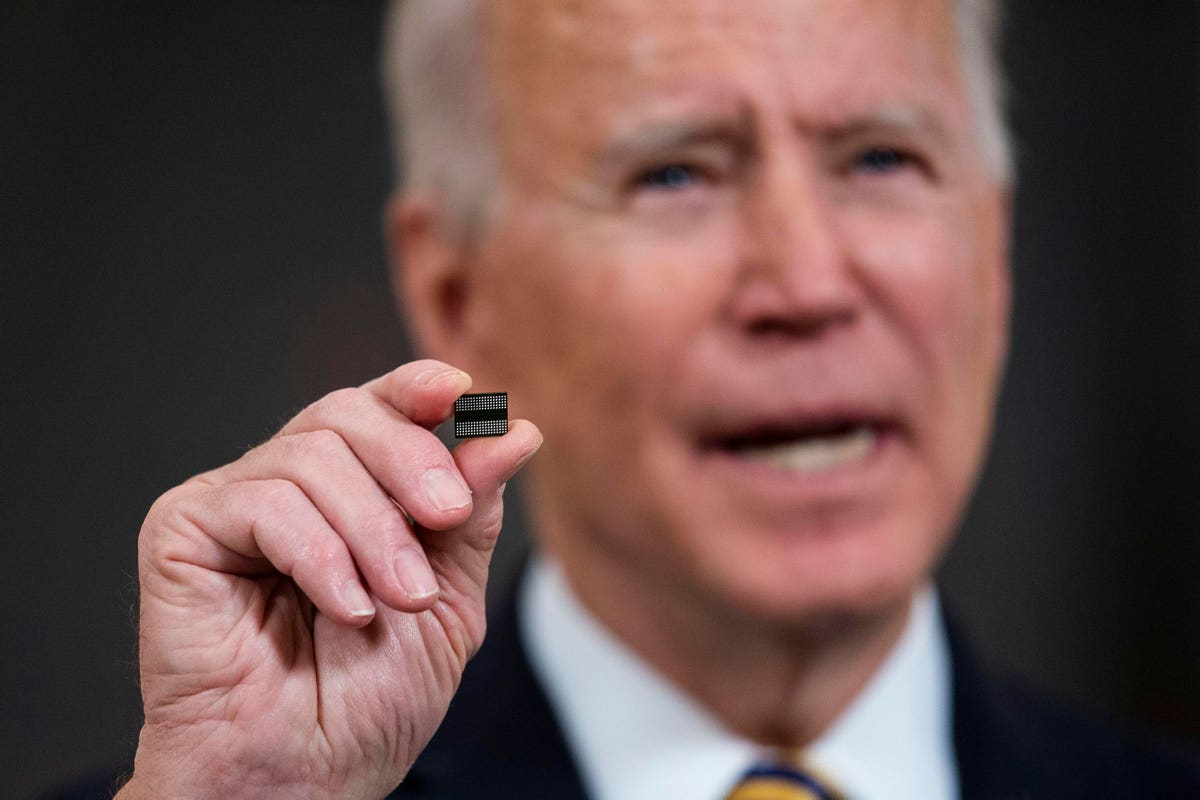 The helicopters are revving up. Sometime next year, the Federal Government will start tossing out huge bales of cash over Silicon Valley and other hi-tech hotspots in response to the perceived threat to American hegemony in semiconductors. It’s called the CHIPS Act, and it may become the biggest government intervention of its kind ever. And it is big – 3 times bigger than Operation Warp Speed that fostered the Covid-19 vaccines. At the most general level, the “Why” of this initiative is obvious. Chip technology has strategic national significance. It has strategic global significance. It is central to the modern digital economy. It is critical for a modern hi-tech military. It has strategic geopolitical significance.

The U.S. has traditionally held a dominant position, but chip technology evolves very rapidly. The industry is in almost a continuous state of disruption. Incumbency is a tenuous advantage at best. Of the top 10 semiconductor companies by revenue in 1990, only 2 still made the list in 2020: Texas Instruments, and Intel. As one of the founding fathers (Andy Grove of Intel) famously put it: “Only the paranoid survive.”

Staying on the leading edge requires huge capital investments, continuously, and the American preference for leaving the financing to the private sector can seem risky in the face of large government subsidy programs elsewhere. Some worry that when it comes to funding for maintaining technological leadership in this industry, the U.S. may – as the saying goes – be bringing a knife to a gunfight.

The worry has escalated now as a result of enormous Chinese government subsidies ramping up over the past several years, designed to achieve (1) self-sufficiency, and perhaps (2) supremacy in semiconductor technology. Since 2015, China has allocated at least $180 billion in support for this industry.

This is the impetus for more active U.S. government involvement, which has reached a crescendo over the past year. But a Big Spend doesn’t guarantee a Good Outcome.

The real concern is that we may spend/invest unwisely, focusing on the wrong targets. It has happened before.

In 1987, in response to a strong competitive challenge from Japan that seemed to threaten American technological leadership in the semiconductor industry, the U.S. government created a partnership with 14 U.S.-based semiconductor manufacturers to “to solve common manufacturing problems and regain competitiveness.” Called SEMATECH, the program was supported by public subsidies which totaled $500 million over five years. According to the New York Times, it was at the time “an experiment without precedent in [American] industrial policy.” The U.S. semiconductor industry did stage a comeback, but the program has been enmeshed in controversy, then and still, as to whether the government’s intervention had helped, hindered, or had nothing to do with the recovery.

In any case, as the “Japan threat” seemed to recede in the 1990’s, government funding for SEMATECH was discontinued after a few years. Industry partners began dropping out. Was the initiative a success? A good investment of public funds? The SEMATECH experience has been extensively studied by academics and policy analysts, but assessments are inconclusive. Some are skeptical:

SEMATECH has been called “a model for how industry and government can work together to restore manufacturing industries.” It has also been called “a classic mistake.” Earlier this year, writing in the Wall Street Journal, a senior industry executive and former head of the Semiconductor Industry Association — a man who certainly knows his way around the public/private High Tech networks – put it this way:

The industry appears to have passed it by.

Whatever the verdict on SEMATECH, history is about to repeat itself on a massively larger scale.

Congress has proposed a new program to boost the American chip industry – which would be 100 times larger than the SEMATECH program.

Aside from Sino-phobia, justified or not, there are strong domestic drivers for this initiative.

First of all, there is the “chip shortage.” (Haven’t you heard? Businesses are hurting.)

(And it’s worse than you think.)

The Secretary of Commerce sounded the alarm.

The Commander in Chief is engaged. In February, President Biden issued an executive order calling for “a report identifying risks in the semiconductor manufacturing.” Two months later he convened a “virtual summit” of industry leaders, bandying a 12-inch silicon wafer to rouse them to action

Of course, lurking behind all of this is the “China Threat.”

CHIPS was approved in principle in January as part of the FY 2021 National Defense Authorization Act, but without funding. That deficiency was half-addressed in June, when the Senate passed the United States Innovation and Competition Act (USICA), with a bipartisan 68-32 vote. USICA calls for spending $250 Billion, of which $52 billion (the CHIPS part) would go to the “federal investments for the domestic semiconductor research, design, and manufacturing.”

(The House of Representatives has yet to act on CHIPS. “House members say they want to write their own bill.” They’ll come around. The measure is currently described as “stalled” but that is probably temporary. We should assume that in some form this measure will pass.)

And so, finally, America may be ready to take up the same approach that almost everyone else in the world has tried: “Industrial Policy.”

CHIPS is a departure from traditional American economic policy prejudices. The United States has never been enthusiastic about “industrial policy” – defined as

Or, as the skeptics at the Wall Street Journal put it:

Or even, as some would have it –

Slush or not, if the CHIPS Act passes, it will be one of the largest experiments in explicit government intervention in the private sector – that is, yes, industrial policy – ever undertaken in the U.S. (at least outside of the military sector). CHIPS subsidies as proposed would be 60% higher than the total revenue of the industry in 1987 when SEMATECH was launched. CHIPS would surpass even the ultimate cost of previous crisis response measures, such as the bailout of General Motors, AIG. The cost of CHIPS is almost $70 billion more than the net cost to taxpayers of the entire Troubled Asset Relief Program (TARP) – the “bailout” program for the financial sector following the 2008 financial meltdown (which in fact produced a net profit for the government, as did AIG). Mortgage giants Fannie Mae and Freddie Mac, also “bailed out” in 2008, returned an even bigger profit to the government:

And compared with the Obama administration’s modest gesture of federal support for manufacturing – the so-called Revitalize American Manufacturing and Innovation Act of 2014 (RAMI) – CHIPS is a quantum jump.

Most striking, perhaps, is a contemporaneous comparison: as noted above, CHIPS’ proposed funding is 3 times more than what the government spent to support Covid-19 vaccine development and manufacturing.

So, leave aside whether “industrial policy” is a good for America. We’re going to have a big helping.

Leave aside also the question of whether $50 billion is sufficient. It is not. But – seen as a down payment, with more to come – it may be called a Good Start. If it is well spent.

That is the real question is: How will this CHIPS money get spent?

If $50 billion of helicopter money really is going to come floating down from the sky, where will it settle? What difference will it make? And how do we measure success?

One answer – however incomplete – can be inferred from the terms of the CHIPS Act itself.

CHIPS includes some of the usual provisions found in most big government spending programs:

These are the blunt instruments of fiscal policy. They provide raw dollars, and some advice, but leave the targeting decisions to others in the private sector, state legislatures, and universities.

The bill also includes some specific mandates, including support for

These goals focus on specific aspects of a complex technological eco-system. Such targets will give some shape to the surge of spending, and will likely determine the ultimate effect – and effectiveness – of the initiative.

Are these the right places to spend this money? Are they the linked to the points of vulnerability in the U.S. position? Will investments in these areas enhance and strengthen the U.S. competitive position? Will all those tax credits and matching grants buy us much?

There are many who think the answer to those questions is No.

We’ll consider that view in Part 2 of this essay.

More colleges face bankruptcy even as top schools experience record wealth
Here’s how to get a jump-start on the upcoming tax season
Do 3 Things For Your Student Loans Right Now
Post-Claim California Private Retirement Plan To Protect Debtor’s Non-Exempt Assets Held To Be A Sham In Gluck
Stocks making the biggest moves midday: Vertex Pharmaceuticals, Moderna, Lennar, Salesforce and more